I love the Japanese language for many reasons. Part of it no doubt stems from the weird way my brain works, while some is an appreciation for the way they’ve resolved certain language issues.

Japanese does not have an alphabet in the way English does; no vowels (a, e, i, o, u, and sometimes y) or consonants (everybody else). Japanese uses two styles of writing: kanji, the complex picture-like characters borrowed from Chinese (here’s the kanji for Japan: 日本); and the two kana, which are parallel systems of writing sounds. One, hiragana, is used for words of purely Japanese origin, and the other, katakana, is used for words borrowed from other languages (as opposed to English, where we just find a way to use our alphabet to force non-English words to look “right” – sayonara, for example).

Katakana in particular is intriguing to me because it’s used extensively in popular culture, including anime. Katakana is where “east meets west” in a lot of ways, rendering Western words into a form of Japanese in ways that, for a language geek like me, are just a lot of fun.

To understand why katakana is so much fun (to me), it’s necessary to understand how it works. (Hiragana works exactly the same; it just uses different characters.) First, while English has vowels and consonants which can have many different kinds of sounds, Japanese has an extremely limited number of sounds – 104 total – which are represented by the kana.

So in place of what we call vowels, Japanese has five (katakana) characters representing five, and only five, sounds:

That’s it. There is no long i (eye) or uh or many others. Latin is like this, too; it also lacks dipthongs, which are vowel sounds made up of two single vowels said in quick succession to sound like a single vowel. The long i sound (eye) is a dipthong made up of “ah” and “ee”. Say “eye” out-loud and slowly, and you’ll hear yourself saying “ah ee”.

You won’t hear yourself saying that in Japanese, or Latin, because they don’t do dipthongs. That makes learning Japanese “vowels” easier but means that, because there are fewer sounds available, there are many “words” (combinations of sounds used to represent an object, action, or idea) that share the same sound. “go” can mean either “five” (五) or “language” (語), just for one fun example. In Japanese, context is everything.

The critical thing to understand about Japanese is that every syllable – every distinct sound – ends in a “vowel” sound, with the occasional exception of an “n” sound. So they have no words ending in t, ck, ll, ng, etc. Not just every word but every syllable within that word either ends with a vowel sound or an n-sound (which, in a few cases, can be pronounced as “m” but exceptions do not disprove the rule).

(And then there’s a whole set of issues regarding how they drop sounds frequently, so a word like “desu” is usually pronounced “des”. But again: exceptions do not disprove the rule.)

Now you are set up to understand why katakana can be so much fun.

As I said earlier, katakana (which was developed largely by women, many of them artists) is used primary for what are called “loan” words – words taken from other languages and transmogrified for domestic purposes. English has an abundance of loan words: resume, kayak, pasta, tortilla. Most languages do this because it’s far easier for the human brain to adapt a thing than create a thing. Why should we come up with a new word when “burrito” works perfectly fine?

The Japanese have a variety of ways of dealing with loan words in katakana. There is, as far as I can determine, no set of rules for how loan words are adopted and adapted; it just kind of happens.

Direct with a bit of adaption

Coffee becomes koh-hee (コーヒー). Japanese does not have a “fee” sound, so they find something close and bob’s yer uncle. Once you know that “koh-hee” is “coffee”, it’s pretty simple. A lot of loan words involve sounds not in Japanese – notably, the letters l and r – so the word gets a Japanese-friendly version that has clear roots in the original. A word that ends in an L sound will, in Japanese, end with “ru”.

Direct and then “fixed”

The English term “convenience store” was adopted along with the actual stores, of which Japan has many. But rather than come up with a new word – and new words are surprisingly difficult to invent for any language – Japanese took the usual human short cut of using the existing words. But “convenience store” would be a massive pain for any Japanese person to say, so they fixed it and made it even easier than in English: konbeenee. Say it out-loud, and you’ll see what they did.

The usual way to write this in English letters (known as romaji) is konbini; this reflects the katakana: コンビニ。The sound for “ko” followed by the occasionally used “n” and then “bee” and “nee”. It’s a wonderfully efficient Japanese solution and, once you know what it is, easily recognizable to an English-speaker. In fact, it would be easy for a lot of people to guess, especially given a bit of context: “I am going to the konbini to buy some koh-hee”.

Katakana is used a lot in popular culture to provide Japanese-ish versions of English titles. So the anime Kill la kill is, in Japanese, ”キルラキル” – “kiru ra kiru”. Why didn’t they use “real” Japanese words for the title? Why bother? The title doesn’t make any sense in English, either. It’s an anime about galactic life forms in the shape of fabric threads trying to take over Earth by becoming clothing that enslaves human minds. What need is there for a sensible title in any language?

For the fun of it 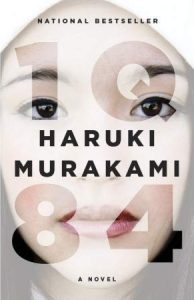 replacement of “9” with “Q” makes sense in the context of the novel (no spoilers); for English-speakers, however, the letter “X” would have been a better fit; we’re more used to that being a variable.

I could give a multitude of examples of each of these somewhat arbitrary categories, but I hope there’s enough here to make clear why I find Japanese so intriguing and enjoyable. One of the funnest things about katakana is how lends itself to making somewhat weird words and titles into creative representations of those words. The anime Flip-Flappers: a nonsense phrase made up to transform the main characters into magical girls is made into a very flashy title logo:

I did not go into how sounds that don’t exist in Japanese – like “fl” – get transformed into Japanese-friendly “furii” and so on. But the katakana version of “flip flappers” allows the silly phrase to be stylized into a title logo that matches, or sets, the aesthetic for this anime.

It’s a truism that Japanese is one of the most difficult languages to learn. I don’t agree. There’s a shit-ton of non-English words to learn; the kanji is massive to even get to a grade school level. The grammar, though, is less problematic than English; far fewer exceptions and weirdnesses.

More than anything, Japanese is a matter of unhitching the brain from English, and English sounds, and becoming open to how the Japanese have adapted their language over the centuries. Kanji started in China, after all; it took centuries for a Japanese version to come to maturity. Katakana is given a lot of leeway to do whatever it is that people, especially artists, want it to do. Language is a reflection of people and their minds. The three forms of written Japanese make this point abundantly clear.